What the experts are not telling you about #Zika

Check out my new book trailer

A new release is coming soon. Check back for details.

Join us live on Twitter every Wednesday at 3 P.M. Eastern time for crime chat.  Great for crime writers and criminology students.  Follow #ACrimeChat for more!

516-590-0357.  There will be a tidbit released in the program that has never before been released to the public.

Proud to be a member of Indie Author Crime Master’s group.

Check out my guest blog on best selling author Sue Colletta’s website.  She has a top notch site and is a highly acclaimed author.  It is a true honor for me.  Thanks Sue!

Welcome to my blog!

Join me and crime writer Sue Coletta on Writestream radio for... 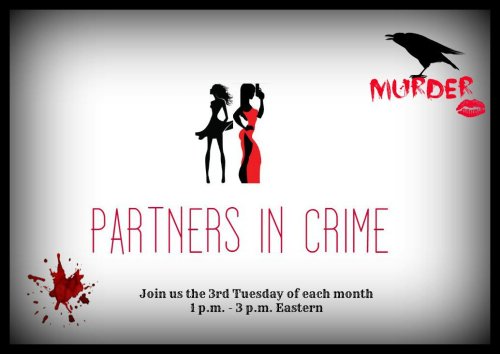 Will be giving a radio interview this Saturday, April 2nd at 2:00 P.M. on Power of Perception radio network, Here is the link:  http://www.blogtalkradio.com/…/power-of-perception-writers-… and the call number is 516-590-0357.

I will be divulging a new revelation about the Zodiac/BTK that has never been released to the public.  If you miss it, I will post it later on Tumblr.  Hope you all are having a great week! 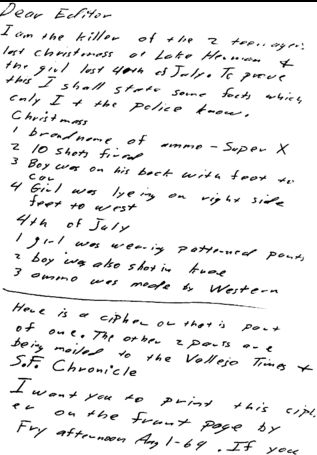 The next Zodiac murders occurred on December 20, 1968 at Lake Herman Road about 30 minutes from Travis Air Force base.  Notice how Zodiac wrote this letter about six months after the murders yet gives stunning details of the crime scene.  Dennis Rader/BTK took polaroid pictures of his crime scenes.  Rader also admitted to an FBI agent that he had purchased a camera overseas and used Air Force base darkrooms to develop his pictures.  Rader also used terms such as north and west.  He also abbeviated his months the same Aug, Oct, Sept, etc.  Rader also admitted he purchased a 22 Colt Woodsman overseas.  Both Zodiac and BTK were horrible spellers, numbered their pages the same, called police and left the phone dangling at the phone booth.  Both men used taxis and victims reported seeing the men “shake” with nerves. 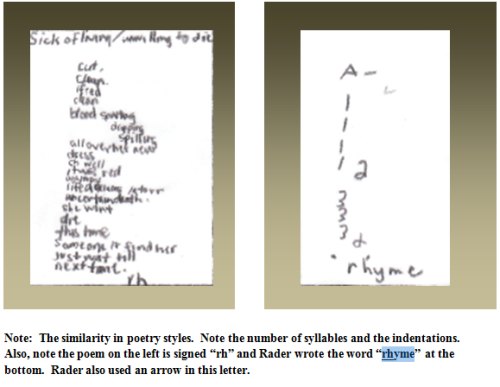 The next murder occurred on October 30, 1966.  The Zodiac murdered a young college student.  Of note, BTK/Rader frequented libraries and Zodiac also stalked women at libraries.  There was a watch found at the scene linked to the military.  Zodiac wrote in his letter that he “choaked” (notice the misspelling) this victim and disabled her vehicle.  Of course we know BTK, was a “strangler.”  He also disabled his victim’s phone lines and a vehicle.  Zodiac in this case disabled the victim’s vehicle by pulling out a distributor wire.  This college library was a short drive, 20 minutes or so from March Air Force base, traveling along a major highway.  Zodiac sent letters to the media, police, and the victim’s family members just as Rader/BTK did in Kansas.

Zodiac also left a poem on a desktop inside the library.  Check out Rader’s use of poetry in this letter he sent from jail. 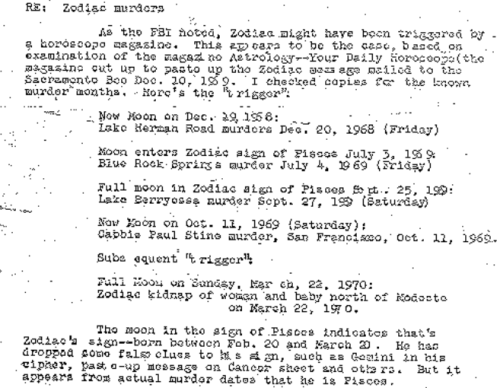 Fascinating!! Person wrote the FBI years ago & predicted the Zodiac was a Pisces, Dennis Rader used astrological terms in some of his jail mail such as waxing and waning of the moon,etc.  Wonder if his murders fit this Pisces/moon patterns, interesting!

” According to an entry I read in his journal, Rader’s family bought
their first TV set in 1955, when Rader was around ten years old.
The Rader boys loved watching The Mickey Mouse Club. But Dennis
enjoyed the Mouseketeers for reasons other than their zany songs
and adventures. By the time he entered junior high, he’d developed an
obsessive and violent crush on America’s newest teen sweetheart—
Annette Funicello. He told Landwehr about how he longed to drive
out to California, kidnap her, tie her up in ropes, then take her to an
abandoned house—always situated atop a lonely hill outside of town. “

On June 4, 1963, a few months after the movie trailer for Beach Party was released and about ½ away drive north from the beach/film location a young couple was murdered by the Zodiac.  Of note in this case, the female victim was instructed to bind the male with precut ropes.  The police thought the shooter was an expert/experienced and the bodies were dragged to a shack.  The female’s bathing suit was cut open with a sharp instrument exposing her breasts. The killer then attempted to set fire to the shack with wooden matches, to no avail.  (Failed arson indicating juvenile or inexperience) 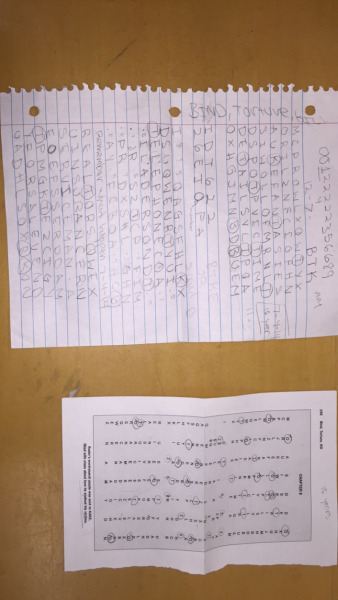 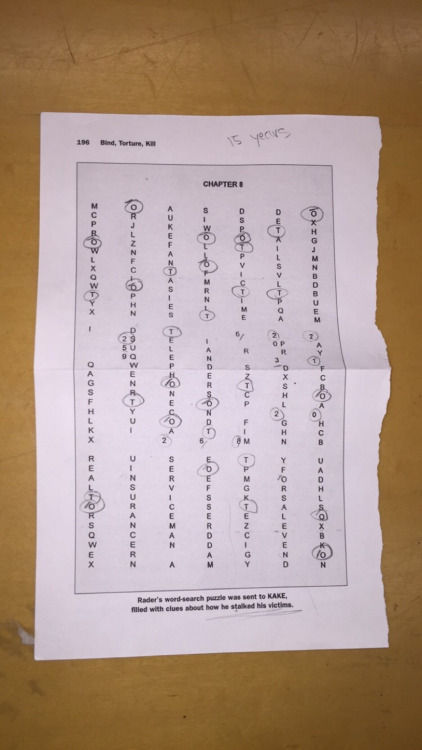 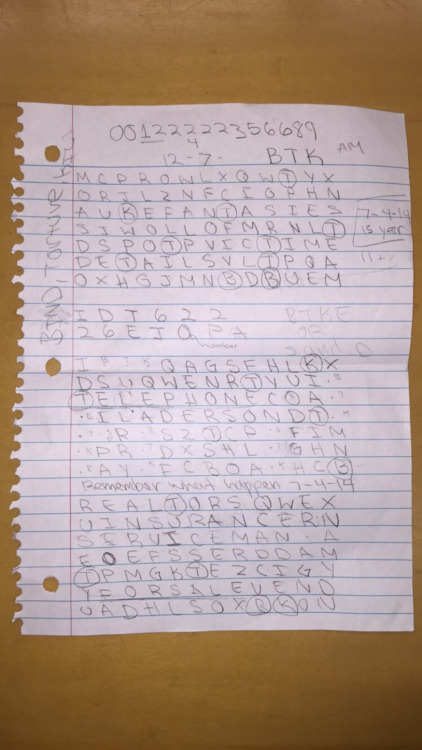 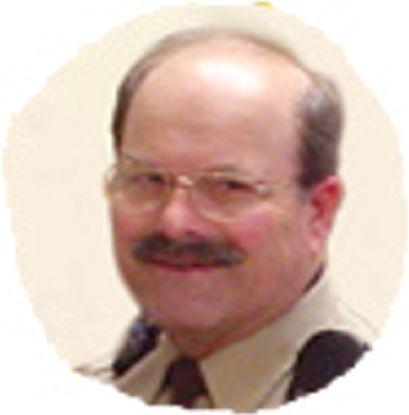 @black-sphere-eyes found this BTK (Dennis Rader) stuff in the Children’s section of her library.  Pretty creepy.

bowlcutworshipper: h4le-bopp: Does anyone know how to find out the IP adress of a deactivated...

Does anyone know how to find out the IP adress of a deactivated Blog?
Someone just told me that they plan to commit suicide today and then deleted their Blog!

Can anybody help with this?

I think the authorities should be able to get it right away on an exigent circumstances basis,

If you have any questions about the article, let me know.  🙂

Thank you so much for posting this and I am very grateful that your followers are open minded to the theory.

I’ve been doing some thinking and I really want to be able to use my blog and the platform I have here on Tumblr to promote other true crime blogs.
If you’re interested let me know. I really want to help everyone get the followers they deserve.

A quote from Inside the Mind of BTK

“One night, he waited until nightfall, then jumped the fence surrounding the Tachikawa Air Base, located about forty miles northeast of Tokyo. I read in his journal how he spent the next half hour hailing down taxis and hopping buses, trying to get as far away from the base as possible, working his way deeper and deeper into the maze of tiny, crowded streets. He  considered this to be a little game. He was going on a pretend hunt.”

Hence the Zodiac murder of Paul Stine, Rader hailed a taxi from Travis Air Force base and murdered the taxi driver.  Rader also later took a taxi to one of his crime scenes in Kansas.

Any handwriting experts out there? 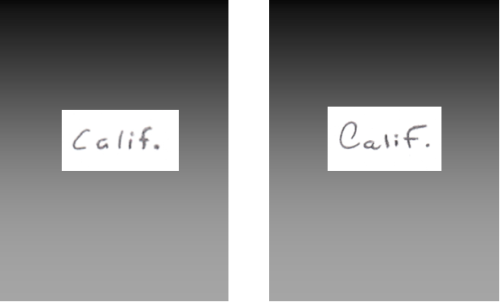 Any handwriting experts out there?

Hello out there.  I have some follow up research that I am conducting and am hoping there is someone out there that can help.  Anyone serve in the United States Air Force from 1966 to 1970?

I read your book and seems it is obvious you have found the killer. Why hasn’t there been anything in the news about it?

I read your book and it seems obvious you have found the killer.  Why hasn’t there been anything in the news yet about it?

Thanks for your question Steven Cutter.  There have been many books written about the Zodiac killer and perhaps this is somewhat of a “boy that cried wolf” phenomenon.  The media and the public may be incredulous in the beginning because they have been let down so often in the past.  I do believe eventually though the truth will prevail.  I hope that answered your question.

I read your book and it seems obvious you have found the killer.  Why hasn’t there been anything in the news yet about it?

kimberlymcgath: Great question Madi.  Yes, the Zodiac killer is still alive which will come as a...

Great question Madi.  Yes, the Zodiac killer is still alive which will come as a big surprise to many.  A lot of people have speculated that because no one has heard from him in so long that he is deceased.  He has killed people under a different name than Zodiac but he is not in a position to hurt anyone anymore.

I hope that answered your question.  Thanks for asking.

Great question Madi.  Yes, the Zodiac killer is still alive which will come as a big surprise to...

Great question Madi.  Yes, the Zodiac killer is still alive which will come as a big surprise to many.  A lot of people have speculated that because no one has heard from him in so long that he is deceased.  He has killed people under a different name than Zodiac but he is not in a position to hurt anyone anymore.